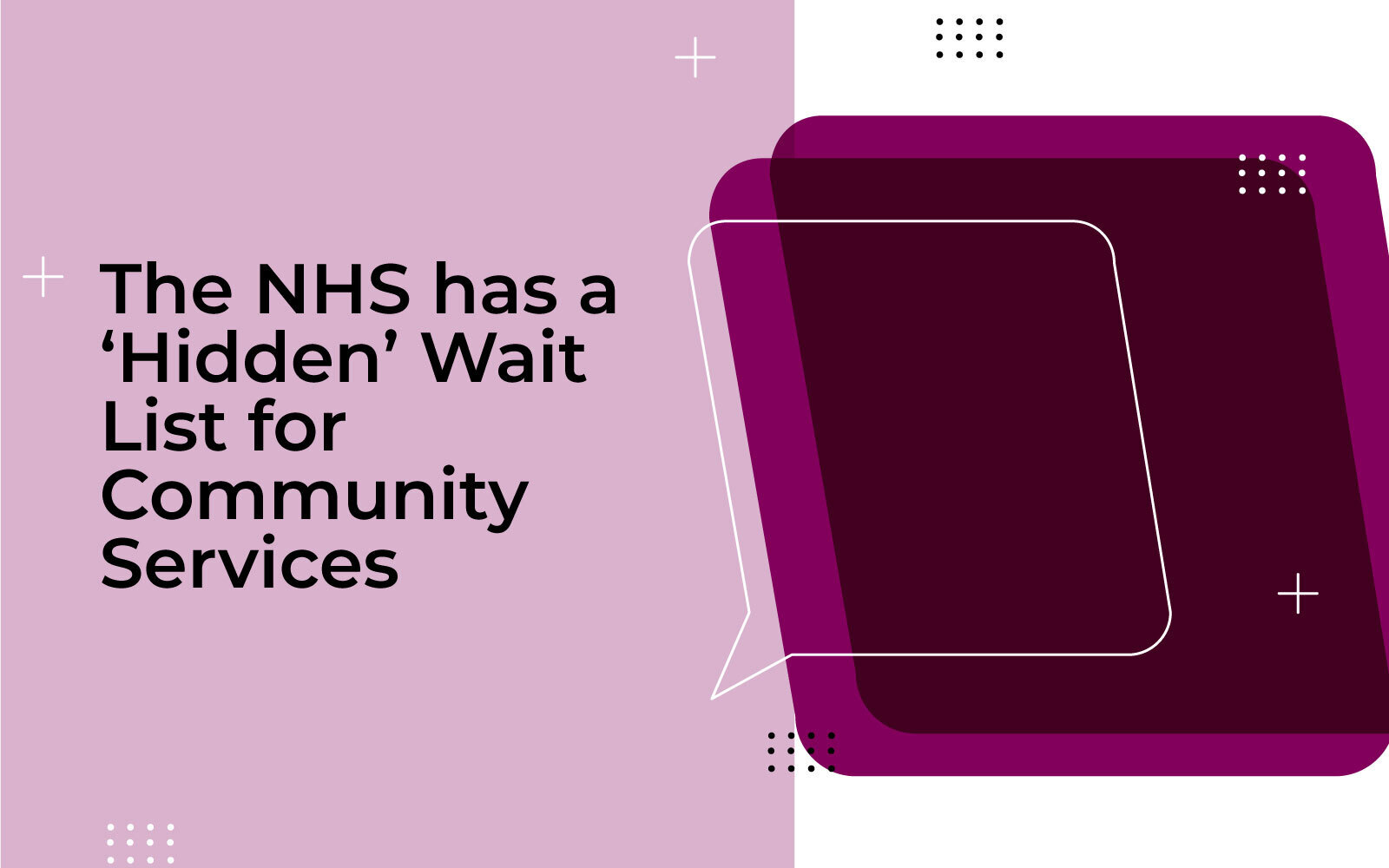 The NHS has a ‘Hidden’ Wait List for Community Services

The Health Service Journal recently revealed that the NHS has a backlog of more than a million adults and children waiting for community health services such as long-term health conditions, speech and language therapy, and MSK treatment in addition to the published list of 6.6 million people waiting for elective surgery.

The new list is currently unpublished but was leaked to the HSJ who have written a detailed article regarding this latest information. “Just over 75,000 children are waiting to access community paediatric services, including children needing help with developmental delay, long-term health conditions and additional needs” says the journal who go on to reveal that more than 74,300 young people are waiting for speech and language therapy and over 321,000 adults are on the list waiting for musculoskeletal services such as physiotherapy, while 120,000 people are waiting for podiatry care.

The article also reveals that there is a wait time of a staggering 120 weeks, over 2 years, for some services, with patients typically waiting more than 3 months to be seen. The backlog also extends to autism services with more than 100,000 people awaiting assessments by March this year, an increase of 40% from the previous year. Mental health is also affected with the Royal College of Psychiatrists estimating that 1.6 million people are waiting to access treatment in England.

What is being done?

The HSJ reports that in the next 2 years, NHS England is pumping £40M into community services specifically for those with learning disabilities and autism, and that this will rise to £80M in 2023/2024. With regards to the huge uptick in demand for mental health services, a spokesperson for the DHSC says, “we know more must be done, and we are committing to expanding mental health services in England with an additional £2.3bn a year by 2023-24 to allow an extra two million people to access the support they need.” While there’s no doubt that the NHS is working as hard as it can to try and tackle the backlog of patients across all departments, the resources and funding currently available don’t appear to scratch the surface of the crisis.

Is the public losing faith in the NHS?

Only 36% of the public are currently satisfied with the national health service, the lowest approval rating since 1997. The backlog of patients has been a hot topic in recent months with the blame pinned to the pandemic which has added to public frustration, however, even pre-covid there was a list of almost 4.5 million peoplewaiting for treatment – a fact that no one particularly discussed and many probably didn’t know. Sadly, it feels like the blame is being laid on the NHS itself, rather than the lack of proper funding, insufficient remuneration for workers, and the shortfall of staff which are all problems that should be tackled by whoever is in power.

Guardian columnist Polly Toynbee referenced a wishlist published by the secretary of state where 13 objectives of equal priority that include 50 million extra GP appointments being made available and the continued support of the workforce were laid out. “This sets out the NHS as it should be, as it would be on 2010 funding rates. As it is, it sets up the NHS to fail to meet impossible goals,” comments Toynbee.

The recently leaked figures made public by the Health Service Journal will no doubt add even more pressure to the NHS and will be of concern to anyone waiting to receive treatment in hospital or in their community. It’s impossible to predict what the future looks like for the NHS, but right now it’s difficult to see the light at the end of a very long, dark tunnel.

Speed Medical has 24 years’ experience in delivering a full suite of medical assessments, medico legal reports, diagnostic investigations, and treatments, all designed to drive efficiencies and value into every service we provide. We work with SMEs & corporates, insurers, healthcare and occupational health providers, and with the legal sector. We pride ourselves on building real relationships with you and your team whilst putting your clients and business at the heart of our service delivery.

For further information on our services, get in touch with our team who will be happy to answer any questions you have.